Vadodara, the magnificent city of Gujarat is also known as Baroda. It is located on the Vishvamitri River banks. It is a densely populated city of the state. It is a home some of the best universities in India. This was earlier a state which changed to city gradually. Vadodara is an acclaimed destination for tourists inviting a huge number of people to visit the glorious city. It poses a rich cultural and historical heritage. The city is known as Sanskari Nagari due to rich cultural traditions. Owing to the advent of the art galleries and museums in the city, several tourists visit this place. Vadodara is ranked as the third most populated cities in Gujarat with a population of over one Million. 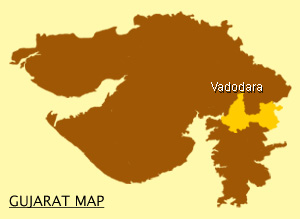 Vadodara was formed by the great dynamic ruler Maharaja Sayaji Rao III who was also an influential city planner. After him, a number of rulers created palaces, museums, lakes and parks. Vadodara is also known as the Garden city since it constitutes several gardens and parks. This is predominantly a Hindu city. It grew from a small town named Ankottaka which was a famous center for Jainism. For some time, the city was also known as Chandanavati named after the ruler Raja Chandan. Read More..................

Vadodara is now a very popular tourist destination accounting to the progressive mindsets and the flourishing cosmopolitan culture. The city is also a major industrial and educational city due to which business has tremendously improved in the place. Vadodara has emerged as a prominent commercial center due to the oil refineries found there. Vadodara is also famous for its flamboyant embroidery and traditional handicrafts. There is a massive improvement in the architecture and infrastructure of the city.

Baroda is known as Sanskari Nagari due to its rich culture and traditions. The cultural life of Vadodara is urbane which adds to the grace of the city. However, Vadodara is dynamic and cognizant in terms its heritage and culture. Every festival is celebrated with full enthusiasm and spirit by the people of Vadodara like Holi, Diwali, Id, Ganesh Chaturthi, New Year and Navratri. Fun fairs are also held in the city, which are enjoyed by everyone equally in the city. Apart from the festivals, classical music and dance also add to the charisma of the city. Read More......................

Vadodara is a sought after place for tourism and attracts a large number of visitors from all over the state. Some of the major tourist attractions in Vadodara are Laxmi Vilas Palace, Naulakhi Well, Maharaja Fateh Singh Museum, Nazar Bagh Palace, Makarpura Palace, Sri Aurobindo Niwas, Pratap Vilas Palace, Vadodara Museum and Gallery. Temples, monuments, parks and lakes are also great places to visit in Vadodara. Read More.................

The official language of Vadodara is Gujarati; however, Hindi, Marathi and English are also widely used. Marathi is also spoken in some parts of the city, primarily by the Maratha Rulers. Hindi, being the national language is understood by everyone here. English is a language used in English and public schools.

How to Reach Vadodara

Vadodara is on the Western Railway and links well on the route from Mumbai and New Delhi. It also has long distance trains which connects almost all parts of the country. Flights are also available from places outside the city which make it easier for tourists to travel. Within the city also travel in easy and convenient. Public transport is readily available like buses, auto rickshaws and cabs. There are also some private bus services provided in Vadodara for commuters.

Vadodara is known for its magnificent shopping. The city accommodates numerous shops and malls scattered all over. The major shopping attractions of Vadodara are furniture, handicrafts and textiles. The popular places to shop here are Teen Darwaza, Mandvi, Roopura and Lehripura Mandir Bazaar. Apart from these, there are also many shopping malls in the city like Alkapuri and National Plaza. Camel leather and pure gold and stone embroidery are famous items to shop here. Read More............

Vadodara experiences tropical dessert climate. Three main seasons are prevalent here which are summer, winter and monsoon. The climate in Vadodara is mostly dry. Summers are hot with dry winds. Monsoons are moist and humid in the city owing to the swarming rainfall. Winters are extremely cold due to the chilly winds from the north. However, the best time to visit Vadodara is winter when the climate is pleasant as compared to the other seasonal climates.

Facts and Figures about Vadodara