Transport in Vadodara is good and convenient. Vadodara is linked very well with the other cities of Gujarat owing to the extensive network of highways, railways and airways. This network has been built and maintained by the transport authority of Vadodara. Local transport is available at the drop of a hat in the city upon which many of the local inhabitants are dependent. These modes of transport are fast and cheap to travel to and from any corner of the city. 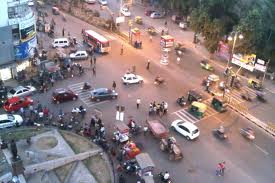 Vadodara local transport comprises buses, auto-rickshaws and taxis. The most commonly used local transport is auto rickshaw which also the most affordable. Vadodara is built on the major rail and road corridors which join Mumbai to Delhi and Mumbai to Ahmedabad. Vadodara is acclaimed as a Gateway to the Golden Quadrilateral.

The prime bus terminal in Vadodara is the STC bus stand which is at a distance of five minutes from the Central Railway Station of the city. Public and private bus services fall under this system of transportation. These are categorized as city, inter-city and inter-state buses. City buses are the ones that commute within the city. These buses are basically used for public transport to workplaces, schools and colleges. Inter-city buses ply from one city to another and vice versa. These are further classified into deluxe, economic and luxury buses. They are used by tourists from different cities and employees who travel from different cities daily. Inter-state buses are another kind which commutes to and from different states. These are dominantly used by tourists and travelers. The National Highway 8 is the main highway used for this purpose.

Auto Rickshaws are also very popular in terms of local transportation. The options are prepaid autos and meter autos. Taxis and cars provide comfortable journeys in a safe environment. Private tourist cabs are a good option for tourists at a flat rate according to the number of hours, days or weeks. These cabs are driven by professional drivers.

As far as air transport is concerned, there is a well-connected airport in Vadodara from where flights take off and land. The Vadodara airport is named as the Civil Airport Harni located in the outskirts of Harni which is to the north-east of the city. It is a civilian airport which has now been affirmed as the international airport and is completely operational now. The Vadodara airport authority takes charge of the luggage, transportation of food and import. This is also held responsible for the proper functioning of the flights and the airport. The major airlines that fly within Vadodara are Jet Airways, Indigo, Air India and Jet Konnect.

Moving on to the railways, the Vadodara Railway Station is the main station of Vadodara. This station is a halt on the Western Railways of the Indian Railways. Tourists can visit Vadodara by traveling by the trains to the city. The premium trains that travel to the city are Rajdhani and Shatabdi Express. Some other trains include Bandra Terminus – Hazrat Nizamuddin Yuva Express, Nizamuddin Garib Rath, August Kranti Rajdhani, Swaraj Express, Sarvodaya Express, Hapa Jat Express and Jam Jat Express.

Transport is major concern among the tourists and locals in Vadodara therefore; the Vadodara Transport Authority has taken several measures to maintain effective and exceptional services for transportation in the city. For tourists, transportation is not a problem at all due to the abundance of choices subject to availability, budget and distance.