Vadodara is one of the most important and strategically located cities in the state of Gujarat. The city has many historical places to explore along with huge industries operating here. As such, there is a huge inflow of visitors including tourists and business travellers in this city. Railways are the most efficient and trusted mode of transport to reach Vadodara city. In fact, it can be said that railway is the best way to reach this city due to its excellent connectivity through rail network. The city has 10 major railway stations apart from the main Vadodara Station. 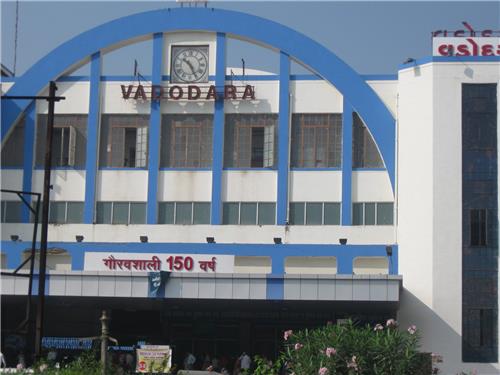 Vadodara railway station is a busy station in Gujarat. Also, it is one of the busiest railway junctions in the entire country. It is an important junction falling under Indian Railway's Western Railway Zone. It has around 150 trains passing daily through the city. Also, Vadodara has the largest electric locomotive shed of Gujarat with many major trains changing their loco here.

Vadodara is a significant station in the history of western railways in India. It was an integral part of Bombay, Baroda, and Central India (BBCI) Railway Company, once started by the Gaekwad King Maharaja Khanderao in 1861. Originally, there was a small station building with halt of very few trains. But gradually, it became the focal point of western railway formed in 1951. A new building was constructed at the place of smaller earlier building in 1954 by Indian Railways to accommodate more trains passing through and having a halt at this station. Vadodara Junction celebrated 150 years of its establishment in January 2010.

Being a significant station of Western Railway, Vadodara station is visited by a large number of passengers daily. Indian Railways has laid down many effective services and facilities at this junction for ensuring a comfortable journey to them. All the latest amenities are available to the passengers at this station. These facilities include:

This railway station has three lines for efficient passing of the major trains to and from here. These railway lines are:

Delhi Line:
This line passes through the route of Ratlam, Kota as well as Mathura. All the north bound trains use this line while passing from Vadodara Station.

Vadodara - Chote Udepur Line:
This is the third line through which many daily passenger trains pass for the various cities in Gujarat. Many trains run on this newly formed railway line as well.

This is the largest loco shed of Western Railway housing around 130 locomotives. It also has AC electric trip shed and AC/DC dual loco trip shed. This facilitates the loco change over for the trains coming from New Delhi main line and those moving towards Mumbai Line. Apart from this, there is a MEMU shed at Vadodara station.

There are many important trains passing through this railway station. These prominent trains include:

Apart from these, there are many major trains and DEMU, MEMU trains passing from this busy railway station in Vadodara city.

Explore more about Transport in Vadodara